2 replies to this topic

Not everyone reads the booksand stuff, because they either don't care, or are not able to. Consequently, some people have no idea what is going on in the story. So, this page will act as a primer of sorts, linking to information useful to Halo 5: it's characters, events, organisations and other stuff. I'll provide my own brief character summaries and stuff, and links to the appropriate information and/ or the actual content they apeared in, where appropriate. There will be spoilers for everything in the below image, and minor spoilers for everything else listed. 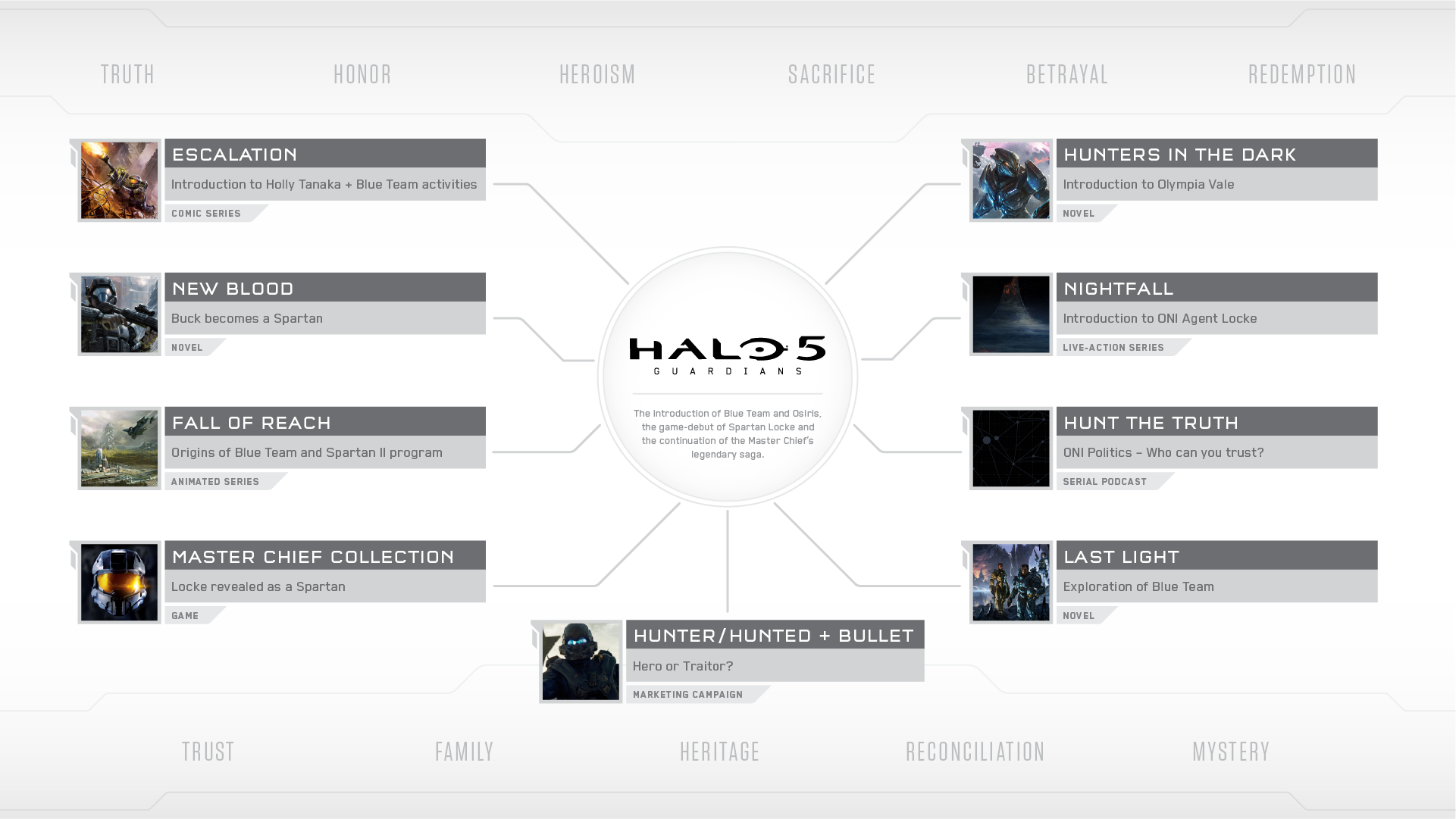 Additional spoiler warning for the following-

Please note I'm covering characters who have been mostly seen in expanded universe content. For example, I will not be covering John, as everyone knows who he is.

Locke acted, for the longest time, outside of the UEG (Unified Earth Government), befor eventually being approached by ONI to take a role as an agent. He soon became a leading intelligence agent, compiling multiple reports about Supreme Commander of the Fleet of Glorious Retribution, Thel 'Vadamee (Later known as the Arbiter). He was assigned to the planet Sedra in 2556, when it was hit by a terrorist attack. Lockelater travelled to a shard of the alpha Halo, Installation 04, to foil the plot. He was one of two survivors of the mission. Between 2556 and 2558, he was recruited as a SPARTAN-IV, and assigned to hunt down the rogue SPARTAN-II team, Blue Team.

Buck has seen combat throughout the war on multiple worlds, and survived them all - Sargasso, Reach and Earth included,.After the battle of New Mombasa, he was approached by the former member of NOBLE Team, Jun-A266, to join the first wave of SPARTAN-IV's. He declined, wanting to stay with his squad. His squad, alpha-nine, was later deployed to the world of Draco-III to ward insurrectionist activity. In the process, the Rookie would be shot in the head and KIA, with Dutch promptly retiring. Buck would be approached again with an offer to join the SPARTAN-IV's, with promises for places for his squad. He would accept, with Romeo and Mickey following suit. Mickey would later defect to insurrectionists, betraying Buck and Romeo. Buck was then assigned to fireteam osiris in the hunt for the officially rogue Blue Team.

Vale is an expert in all things Sangheili, having a complete understanding of the species' culture and language, and is able to speak it as good as her own native tongue. She was assigned in a mission to Installation 00, the Ark, after the end of the War, as a liason between human and sangheili operatives. She demonstrated remarkable enough combat skill in and after this operation to be invited to join the SPARTANs, to assist Osiris to hunt Blue Team.

Tanaka was originally a UNSC Army Engineer before her induction in the SPARTAN corps, having grown up on a world glassed by Covenant, combat, survival and engineering comes naturally to her. She took part in an operation alongside spartans Palmer, Thorne and Dr. Henry Glassman in 2558 to infiltrate a Covenant Ship and gain access to the Absolute Record. After this, she was invited to join fireteam Osiris to hunt the rogue squad Blue Team.

Referred to as 'The Rabbit' by her peers, Kelly is the single fastest Spartan, and easily the fastest human to have lived. She was one of the original members of Blue Team in 2517, along with Samuel-034 and John-117. She has taken part in over one hundred operations against the Covenant and insurrection, and one of the few survivors of Reach. After the battle, she was wounded and taken by Dr. Halsey to the shield world known as Onyx, where they encountered the Spartan-III's. She, along with the rest of her group, were trapped inside the Shield World for several days before they were able to communicate with the UNSC. She then reunited with Blue Team and conducted operations for ONI S3 in the post-war period, before reuniting with the long-missing 117 to fight the didact on Installation 03. After this, the squad as a whole went MIA.

Thanks for helping with lore when it's needed here BaconShelf

So... Turns out Kamchatka is a real place. It's a very volcanic place on the western part of the Pacific ring of fire, in East Russia.