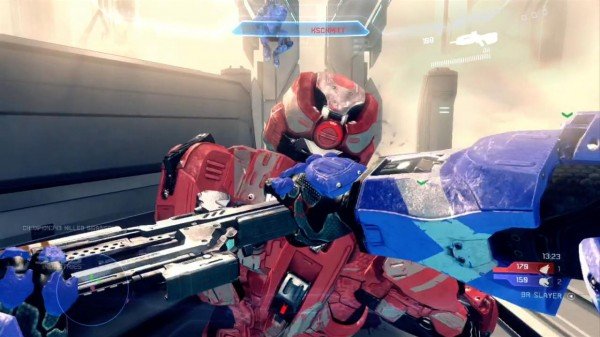 Below is the complete list what is available to use in your custom loadouts.

we now know all of the Weapons, Grenades, Armour Abilities, Tactical Packages and Support Upgrades that will make up our Loadouts in Halo 4. Many of these abilities and upgrades will not be available at the start of the game and will need to be unlocked using Spartan Points, nevertheless, here is the complete list:

Enables a powerful burst of movement allowing the ability to evade or quickly close the gap.
Allows users to predict enemy signatures through walls and other hard surfaces.
Allows users to generate an almost identical holographic decoy to to deceive enemies during combat.
Allows users limited flight through a vertical lift propulsion system similar to that of EVA re-entry packs.
Allows users to a protective barrier of hard light which stops most small arms fire and some explosives.
Allows users to generate a visual effect astonishingly close to invisibility.
An automatic turret which can be deployed to defend its user or command a key battlefield choke-point.
Allows the user to release a short-range energy field that heals any nearby spartans.

Allows unlimited sprint.
Speeds up your armors recharge rate.
Allows the recovery of grenades from fallen allies or foes.
Increases the rate at which energy recharges for armor abilities
Increases grenade carrying capacity.
Allows the use of a primary weapon in the secondary weapon slot.
Allows the user to advance quicker in rank.
In modes with personal ordnance, requisition lets the player request new choices when an ordnance is granted.
Increases the long term durability of your vehicle as well as how it reacts to EMP charges.

Steadies your weapon while being struck by incoming fire.
Increases ammunition capacity for both starting weapons and ordnance drops.
Speeds up reload and weapon swapping.
Increases motion sensor range.
Allows the use of motion sensors while using a scope.
Alters grenade performance, increasing blast radius and decreasing grenade damage received.
In modes with personal ordnance, offers more frequent ordnance drops to the user.
Increases how long a mounted weapon can fire before overheating as well as movement speed with detached turrets.

Allows Spartans to Sprint quietly. They also appear as an outline to players using Promethean Vision and perform quicker assassinations.