Last week we had a preview, this week we get the full reveal!
After the little tease of REQs we got in the preview last week we now have the full picture without any smudges or ONI logo's. And I've got to say, it was surprising.
Anyway, here's the list: 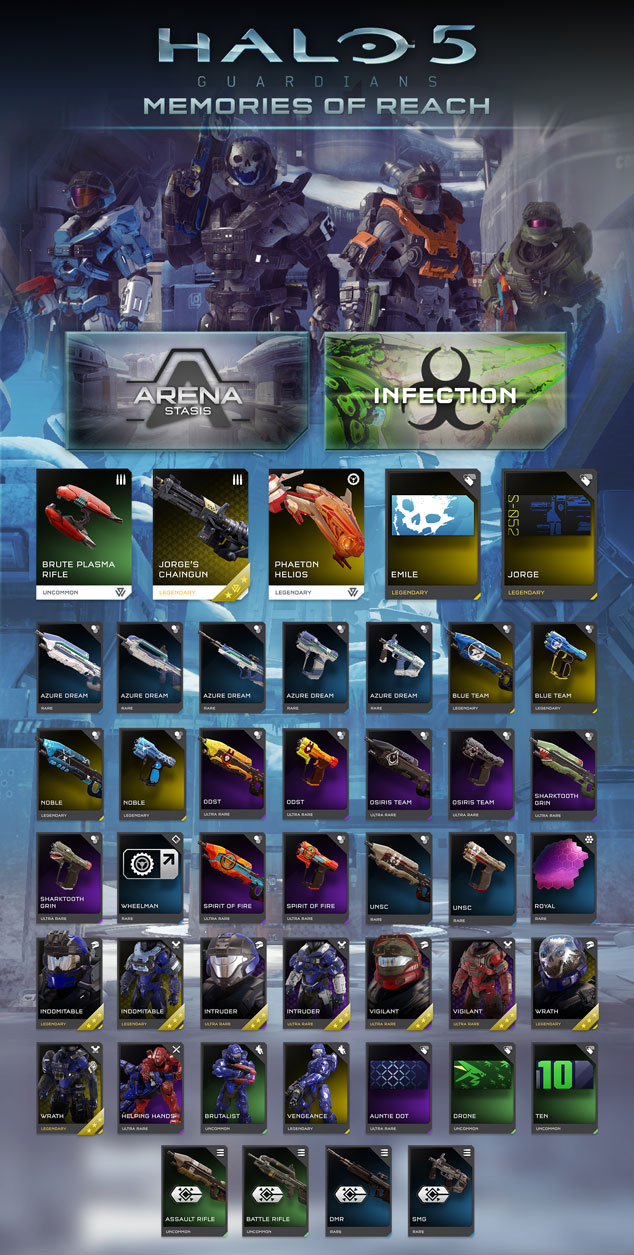 Turns out all the speculation surrounding the Legendary weapon was true. Jorge's HMG is making its return to Halo! If you get your hands on it you'll find that you walk a lil' faster and can take more of a punch. Also, your bullets explode in impact. I don't remeber it doing that in Reach but... I'll take it.
The REQ with the mysterious ONI symbol plastered over it turned out to be a Pheaton variant. We were all hoping for the Falcon, but maybe this Pheaton won't explode from peashooter fire.
Next we have all of the (predicted) Noble team armors. Keep in mind that they're not supposed to be exactly like the armors you saw in Reach (e.g "Emile's" knife is not on the shoulder armor). Wanted to clarify this since I've seen people literally going crazy over this.
We also get a little armor mod that's going to help you be the designated driver.
Finally we have the weapon attatchment of which I'm still not sure what they do exactly. I believe Fishy said on my last post that it was a marker/spotter of sorts.

Moving on we have images of UI improvements. We finally get post game medals and extended stats in the carnage report for bragging rights and showing off. Extended stats include:And here's how it's going to look like: Alongside the improved carnage report is a search preference tool that'll help you find a game your way. It's not exactly server region selection, but it's a step in the right way. With the tool we're getting we can choose between:Don't forget to leave your thoughts on Waypoint when it drops so 343i knows right from wrong!

Additionally we get an explaination and criteria for the Infection medals we were shown in the preview.
I'll post the list down here:

Finally we get some additional tweaks for the Halo 5 sandbox in a little message from the Halo 5 multiplayer team.

For Memories of Reach, we’ve fixed a bug where Spartan Charge would not properly target enemies at the edges of a red reticle on the horizontal plane (you can still get red reticle and miss vertically). Fear not, though – players who skillfully evade a Spartan-Charging player with Thrust will still escape without taking damage. Additionally, Spartan Charge with Speed Boost will no longer be a one-hit kill, and Spartan Charge with the Gravity Hammer will no longer be a one-hit kill.
The last item is a slight increase to movement speed while crouching. This has been increased to allow for crouching to be a more viable choice for players to flank and attack. The speed isn’t drastic, but after months of testing we’ve found it to be the sweet spot.

So, this is what you can expect when the update drops.
Leave your thoughts and comments down below!
Thank you for reading!